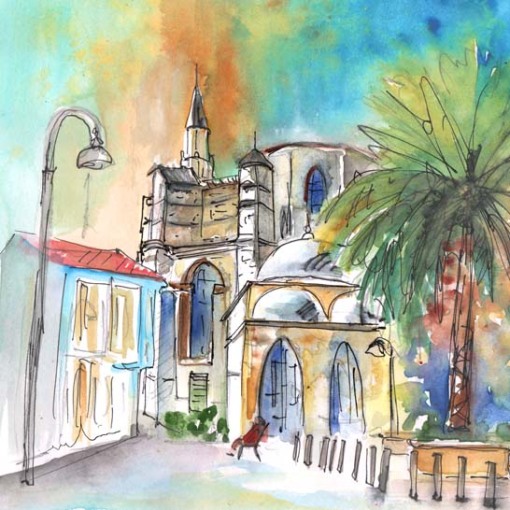 As I said in my previous post about old people in Cyprus, we spent some time in the Turkish part of the divided capital Nicosia. For some reason it inspired me much more that the Greek part, probably because the motifs there were artistically more “exotic”.

Anyway, I always wanted to visit Turkey, and I hope I will do some day. Just at the moment, it does not seem possible, Kevin is not so keen… who knows why! But I won’t give up, and well, at least in Nicosia we have already been on Turkish-occupied ground…  Like many other English people, and probably most of the people born on an island, Kevin has a tendency to reject loads of things without knowing them. Most of the time it concerns foreign food, but sometimes, , in tough cases like Kevin, they extend to the rejection of whole countries… this is why, so far, Kevin does not want to visit Turkey! In fact he says the only Turkey he’s interested in is the one you eat at Christmas! It is so beautiful though… and from what I remember from my life in Germany where we had many Turkish immigrants, the Turks are lovely people… and make such great food!

Now, apart from the food which should be a major reason to visit Turkey, the kids there seem to be great, in the sense Kevin loves it: Well-educated! 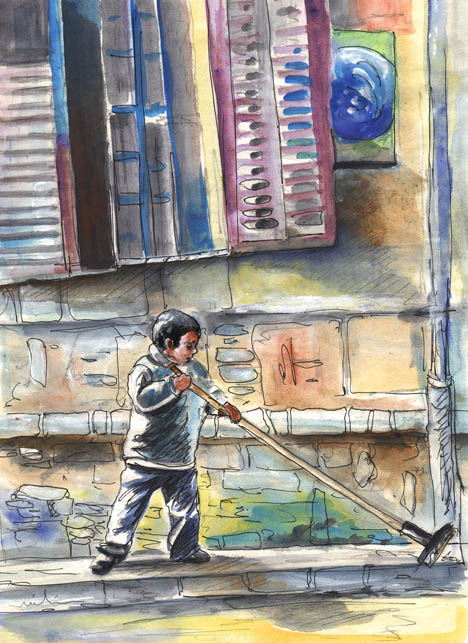 We were extremely impressed and touched by this scene, being used to something very different in the country where we live (Spain). Many Spanish children  seem to be educated in such a way that they are compelled to damage or even destroy everything which stands in a public space and is not theirs. The way that little guy in Nicosia was cleaning the street in front of his house with such eagerness and professionalism was incredibly poignant. I don’t think that we should have our children working the street, but really, it could not damage them to have them cleaning the space in front of their house sometimes, instead of spraying graffiti on the neighbours walls! And above all: we wouldn’t have to do it   🙂

Well, I never had children.. and remembering what an “enfant terrible” I was, it is perhaps not that easy to achieve that… but really, as I saw that little guy, I thought: I wish all the children of our world would be like him…  once in their young life at least! 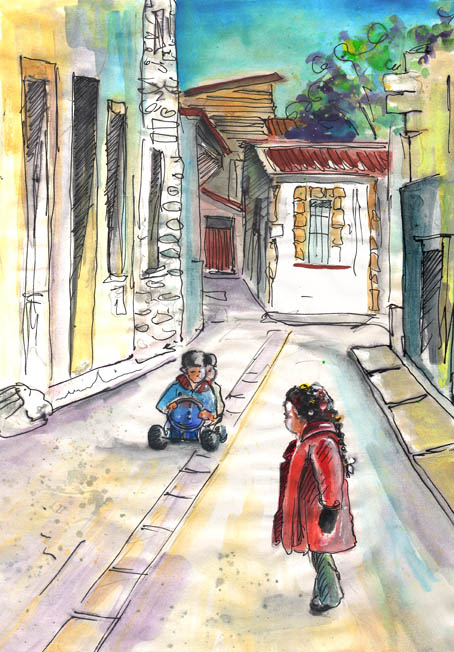 Children in Nicosia – watercolour and ink travel sketch, by Miki

I adored this scene between the little girl in her best Sunday clothes and the two little boys driving wildly down the street in their toy car. It brought back memories of my childhood, with the difference being that I was the wild one on the street, always dirty and wearing rags. Not that my parents didn’t dress me well and clean, but I really had no respect and time for good manners and care. The little boys were watching at me as if I came from another planet, with some deference though, and from a distance, as I used to be a little aggressive, or at least I didn’t handle anything with kid gloves, if you understand what I mean. But generally, aside from myself, in younger days before females pretended to be males,  boys were the wild, and girls the delicate ones… it was fun to see that this hasn’t changed yet in Nicosia!

Woman in Nicosia – watercolour and ink travel sketch, by Miki

This scene was indeed for me THE image of Turkey, with carpets everywhere.. I don’ t really like carpets, and certainly not in my house, they harbour too much dust and all sorts of disgusting stuff.  But it is very funny to have them hanging all over the public places, as it was in Nicosia. They give the town something like a fifth dimension, besides space and time,  and this dimension is quite close to art!

God, I am exhausted now! Not only did I walk hours and hours through Nicosia, but I did the paintings, and now this WordPress blog post with all the connected work! I don’t want anybody telling me that artists have an easy life… I at least never stop!

See you soon again for the part 2 of Nicosia Street life when I am rested!

And in the meanwhile, while I rest,  YOU can have a life and go to my FAA gallery and spend more or less money on my artwork! The paintings above are available directly online as Giclee print in many different dimensions, on paper or canvas, and also as greeting cards. Just click on the widgets below

3 Responses to “Street Life in Nicosia 01”